VisitEngland is the official tourist board for England. Before 1999 it was known as the English Tourist Board and between 1999 and 2009 as the English Tourism Council. In 2003, it merged with the British Tourist Authority to form VisitBritain before re-launching as a separate corporate body in 2009. VisitEngland plays a key role in building England’s tourism product, raising Britain’s profile worldwide, increasing the volume and value of tourism exports, and developing England and Britain’s visitor economy.

So what's a better way of increasing tourism and attracting people to England than using one of our unique candy apple ottoman cube openers. With our partners Equinox Design we were contracted to supply storage ottoman cubes and bench seating for VisitEngland exhibitions in Barcelona (2017) and Las Vegas (2018). It was an absolute pleasure making these ottomans, and we think they look stunning in the exhibition stalls! For more details on exhibition seating and ottomans give us a call on 0113 276 0171. 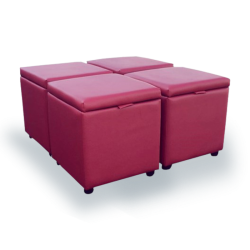